Have you ever being retrenched? I guess this should be an uncommon case, if we work attentively and loyally. But, sometimes it is not within our control. No matter how deeply effort and time you contributed to your company, shut down or economy downturn can cause you unemployed within a short period.

Recently, one of the subsidiary company where I work has been notified their staff that they have been retrenched. Approximately 50 people are being involved. I’ve heard some happy and some are sad, some of them had been working there for over 10 years. I know it is very difficult for them, plus those who received the letter were a husband whose wife is not working. Although they will get compensation, but to find new employment at this time is not easy.

Now am thinking, when my time will come? Am I ready? But… one thing I know, that will be good news for Mr. H… :D 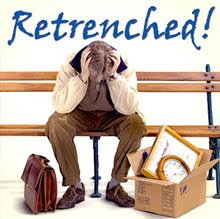 I pray for those who have been retrenched will have a better opportunity out there InsyaAllah...